EXPECTATIONS: A quiet character drama-edy with Fumi Nikaido, who’s a big plus in my book.

REVIEW: Nobuhiro Yamashita is a film-maker that I am brushing up on and the work I have seen of his so far is very enjoyable. In particular about his films, he gets fantastic performances from his female stars. Like Kaho in A Gentle Breeze in the Village to Bae Doona (a Film-momatic favourite) in Linda Linda Linda and Atsuko Maeda in The Drudgery Train and Tamako in Moratorium. But in La La La at Rock Bottom (also known as Misono Universe), he has rising talent Fumi Nikaido (another Film-momatic favourite) and I was excited just for her alone, since I have never seen a bad film from her. And while she is fantastic in this film, I was more surprised by the male lead in this film, Subaru Shibutani. Add the fantastic offbeat and naturalistic humour expected from Yamashita with the touch of music that is reminiscent of Linda Linda Linda, and you get one of Yamashita’s most crowd-pleasing films yet. 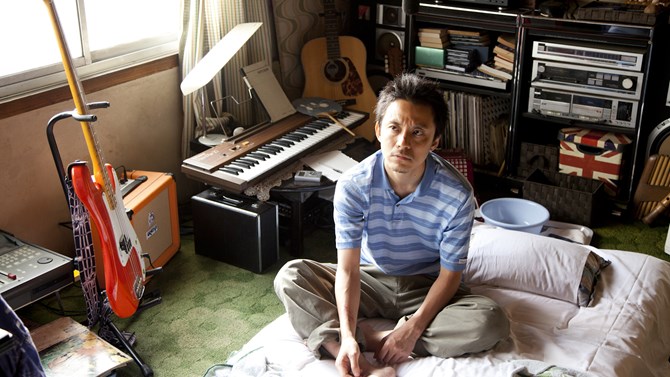 Subaru Shibutani stars as Shigeo, a low-life gangster who just finished is 18 month stint from prison and when he meets his so-called friends, he gets beaten up by them and loses his memory. He then stumbles into a band performance (by real-life band Akainu) in Osaka and literally steals the show with his surprisingly capable singing. He is then taken in by Kasumi (Fumi Nikaido) who lives in a record studio with her grandfather. She names Shigeo “Pooch”, after her late dog, and gets him to work around the studio and also lends him the position of vocals for the band. But sooner or later, his memory catches up with him and with Kasumi’s investigations of his past looming towards him, Shigeo will have to decide whether to go back to his old ways or take up what has been long building between himself and Kasumi.

Now stories with amnesia have long been used in films for ages and infinitely more in soap operas, so there isn’t any more juice you can get out of the old trope. Fortunately, that is the only old trope in the film that feels cliched. The storytelling of the trope is refreshingly subtle, given Yamashita’s directing, and the focus of the drama lies within the characters. And they are wonderfully portrayed by the actors. Subaru Shibutani is an actor that I’ve never heard of (although he is more of a singer by trade) and he gives a damn good performance as Shigeo/Pooch. He exudes charisma and likability without really doing anything and his gradual transformation back to his older self is well-done, as he hints of a dark side with bouts of menace. When he proclaims that he may be dangerous, we actually believe it. As for the role of Kasumi, some actresses who would have a similar role tend to overplay the toughness of the part to the point that they’ll look petulant or whiny (i.e Kate Bosworth as Lois Lane in Superman Returns), but not Fumi Nikaido. She has impressed me with her many roles from Himizu to My Man to Why Don’t You Play in Hell and Brain Man, and she does it here in La La La at Rock Bottom, with her performance. Here, she plays her role with charm and courage without looking forced and she conveys her sympathy to Shigeo/Pooch with conviction, even if she punches him or writes make-believe stories about his past like when he was a singer who was betrayed by his own manager. 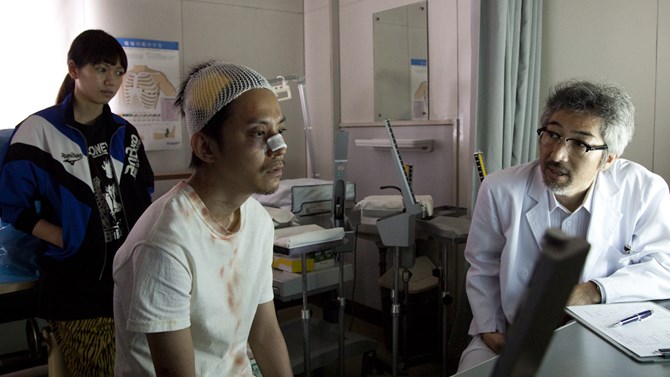 The storytelling also pays off dividends with the subtlety and naturalism from Yamashita’s direction. But the film never threatens to be dull due to the quirky humour from the realistic situations (aside from the amnesia story) and off-kilter supporting characters. The grandfather of Kasumi was amusing, particularly when he thinks Shigeo/Pooch is his son and the members of the band (Akainu, in real-life) are funny to watch and the music they bring with Shibutani’s vocals are silly and amusingly catchy. But not all of the supporting performances are funny, as there are great dramatic performances as well, particularly from Izumi Matsuoka, who plays Shigeo/Pooch’s sister. Her main scene with Shibutani is poignant and hits the audience hard when she tells what she and their family has gone through. It is because of Yamashita’s direction that the emotional beats pay off, and even more so since the story involves the use of amnesia for drama.

The story is also surprisingly realistic despite the amnesia, especially when it never goes for out-of-nowhere story beats or forced melodrama or even a romance between Shigeo/Pooch and Kasumi. I was surprised that it did not go to that route, but the bonding between the two was more than enough, since the two had great chemistry that went from owner-and-“dog” relationship to friendship. And what would I be if I didn’t mention the songs? Although Japanese is a language I know very little of, the songs are great to listen to, although the songs are quite repetitive at times and they are not as crowd-pleasing as the songs in Linda Linda Linda.

Also, the brutal violence sometimes conflicts with the tone of the story and it comes off as jarring and could take the audience out of the movie, but the positives far outweigh the negatives here and La La La at Rock Bottom is a great acting showcase for Shibutani, another success for Nikaido and one of director Yamashita’s most crowd-pleasing films.

Subaru Shibutani gives a fantastic performance as “Pooch”, who shows charisma without really doing anything and his character progression is convincing, possibly shocking; while Fumi Nikaido shows that’s shes one of the best young actresses in Japan, due to conveying her character’s courage without feeling forced
Yamashita’s penchant for quirky comedy and his direction comes through in very funny and stirring ways (off-kilter characters, immersive storytelling, naturalistic/realistic portrayals of the city)
The theme song is incredibly catchy