EXPECTATIONS: Absolutely no idea. Which is what every Sion Sono film should elicit. Feelings of obliviousness and curiosity.

REVIEW: Believe it or not, this is apparently one of SIX films Sion Sono has planned for release this year alone. And one of them is still not disclosed yet. And I’ve only seen two of them! I remember viewing my first Sion Sono film (Suicide Club) and it was one hell of an experience. The blood and gore, the pitch-black satire, the hyper-realistic world, the dark tone in contrast to the surreal J-Pop musical interludes, it was pure euphoria. I’ve been following his work ever since and now Sono is on his way of surpassing Takashi Miike to become Japan’s fully-fledged maverick filmmaker. His films have ranged from a wide array of genres (often mixing them all at once) and, like Miike, is more popular overseas than in his native country. And like I said before, he has SIX films in 2015. One of them is a teen sex comedy, one of them is a gangster crime film, one of them is an arthouse sci-fi drama, one of them is a teen horror film, one of them has not been disclosed yet and the one I’m reviewing is a family film that just happens to have rock’n’roll, kaiju, cute puppets and city-wide destruction. This film is Love and Peace. A film I never would have expected from Sion Sono and I gotta say, it was a terrific surprise.

Hiroki Hasegawa stars as Ryoichi, a timid salaryman at a musical parts company, who dreams of being a rockstar. He constantly gets bullied at work by everyone except for Yuko (Kumiko Aso), a woman he has a crush on. To pass through the dull ennui and everyday minutiae of his life, he breaks routine, buys a baby turtle and names it Pikadon, which is amusingly defined as a nuclear disaster. Bonding with Pikadon as a friend as well as an outlet of his frustrations, dreams and wants (using a homemade board game), he decides to bring Pikadon to work, but Pikadon shows itself to the entire staff and Ryoichi gets ridiculed much harsher than usual. Having enough of this abuse, he lets his anger out on Pikadon but in a tragic fashion, he accidentally flushes it down the toilet, which leads it in the sewer. As Ryoichi cries over the loss of his one true friend, Pikadon discovers something in the sewer after being brought in by a homeless man (Toshiyuki Nishida) that can only be described as magical; so magical that it will change the lives of Ryoichi and everyone else in Japan forever.

There’s much more I can go through with the synopsis, but the film is best left unspoiled. But what I can tell you that this film is very reminiscent of director Tim Burton’s work and seeing it come to life was a pure delight. Unfortunately the film does not start that well. The overacting from the cast to the assaultive editing and meandering storytelling makes you wonder what the point of the film is, but once the film introduces Pikadon, the film improves immensely. The film doesn’t even try to be realistic to the point that that the fantasy world Sono is trying to portray is achieved with very little CGI and intentionally low-fi practical effects. Characters in the sewer ranging from discarded pets and toys (aside from Nishida) are all puppetry (with strings shown) and they are all adorable to look at and lovable, from the tragic doll Maria (voiced by Shoko Nakagawa) who was left behind by her infant owner; to a smart-aleck cat Sulky (voiced by Shinji Miyadai) who despises humans and an antique toy robot, PC-300 (voiced by Gen Hoshino), unaware of the world outside the sewers. The musical score is also reminiscent of Danny Elfman’s scores from Tim Burton films, although Sono does reuse musical tracks from his previous films like Love Exposure and Himizu. He also uses excerpts of Beethoven’s Ninth Symphony (the same excerpts used in A Clockwork Orange), which add to the maniacal world. Oh, did I mention Pikadon itself? I can say, without doubt, that this is the cutest turtle ever portrayed on film. The huge eyes, the way it walks and the fantastic vocals from Ikue Otani (who voices Pikachu in the Pokemon series) just engenders sympathy from the audience so quickly, it’s irresistible.

As for many of Sono’s films, there is a bit of social commentary within the proceedings, and in the case of Love and Peace, it is the theme of consumerism. All the toys and animals were discarded and it is a commentary about what the Japanese people take for granted and how much they are spoiled with new trends of shopping. Sono also adds satirical barbs around the music industry and celebrity stardom that surprisingly fits into the movie well, with its terms around Ryoichi’s character development and what it means for celebrity fans to show love instead of excessive fandom.

As for the human characters, they all give good performances. Hiroki Hasegawa, who is on a roll with his versatility lately (hyperactive film director in Why Don’t You Play in Hell, vocal teacher in Lady Maiko, warrior soldier in Attack on Titan films, suitor in Princess Jellyfish) and his role as Ryoichi is played really well and I was surprised at how believable he was a rockstar. His singing skills are great and the songs themselves (particularly the title song) are incredibly catchy. There’s even a song that is a reference to Why Don’t You Play in Hell that had me laughing. The character growth from timid salaryman to egotistical rockstar is sometimes hard to watch due to how selfish Ryoichi can be, yet it is easy to believe and to sympathize and it is a testament to Hasegawa. Toshiyuki Nishida, whom I know from the TV series Monkey, gives a great performance as Pa, the homeless man who lives in the sewer. He shows the perfect balance of tenderness and grumpiness to become endearing and once a reveal happens later in the film, it will surprise you at first, but then you realize it fits perfectly with his character, thanks to Nishida’s performance. The only unfortunate liability in the cast is Kumiko Aso. There is no fault in her performance itself as she does soulful and pathetic quite well (it was amusing to see her wear such homely clothes), but her role is incredibly underwritten that it hinders the emotional climax quite a bit. 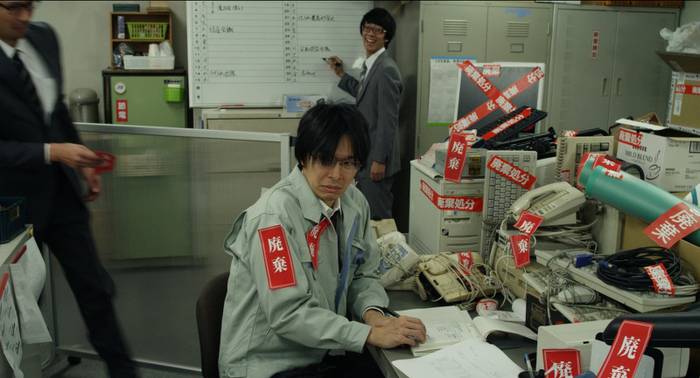 Speaking of the climax, the last 20 minutes are spectacular to behold. Pikadon takes center stage of the film (and in the film, literally) and the whole city is awestruck by it despite “the destruction spread by its love”. The way it calls back to Ryoichi with his frustrations and dreams is genius in its comedic effect as well as its emotional catharsis. Aside from its flaws, Love and Peace is a film I never thought Sono would make, but not only I’m glad that he did, but I hope he does more films like this. The cast give great performances

The special effects exude magic and wonder to the story

Nice integration of social commentary and satire into the main story

The songs are catchy and memorable

The film does not start well

Kumiko Aso is quite underused

Those expecting Sion Sono’s edgy touch will be disappointed

SCORE: 8/10 (Definitely Sion Sono’s most light-hearted and heartwarming film he’s ever made)