REVIEW: It has been a while since I have seen a new film by Yoshihiro Nishimura. Ever since the entertainingly excessive Helldriver, he’s been off my radar despite his new ventures like Zombie TV and his entry in The ABCs of Death. I have always enjoyed his special make-up and prosthetic work ever since I watched the cult-classic The Machine Girl and in recent times, the schoolgirl splatter/condemnation of glorification of women flick, Tag, by Sion Sono and his work on the infamous Attack on Titan films. Now, we have his latest film, The Ninja War of Torakage, a ninja film that seems to hint that Nishimura has gone in a different direction after his revered gore flicks. But as it turns out, The Ninja War of Torakage is different to his previous films in many ways but it still retains his signature for bizarre humour and some scenes of blood and gore. But does different translate as good? 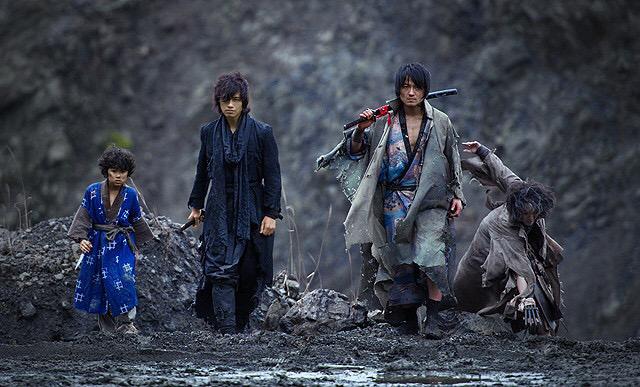 Takumi Saito stars as Torakage, a legendary ninja of the Homura clan, who is currently retired and living peacefully in the countryside, with his wife, Tsukikage (Yuria Haga) and son. Happily bonding together with numerous poop jokes and playing out in the fields, the time of peace comes under fire when Shinonome (Eihi Shiina), a former master of Torakage, takes their son hostage and forces him and Tsukikage on a mission to steal the Golden Scroll from the cult leader of Yagen, Rikuri (Kanji Tsuda). So Torakage and Tsukikage once again done their ninja gear but during their mission, Tsukikage gets captured by the Yagen cult. What’s a ninja to do? 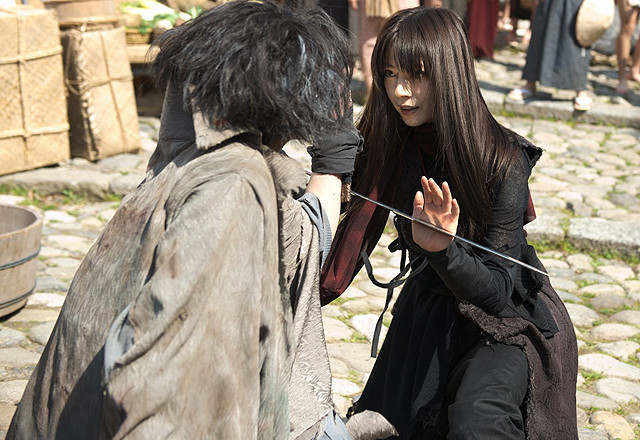 The expectation of ninjas in a Yoshihiro Nishimura film would be expected as a gorefest, but surprisingly, there’s very little gore (in Nishimura standards) that it feels kind of strange to witness. Sure, the film starts off with a ninja battle with blood squirting out of their necks (per usual for a Nishimura film), but after that scene, there’s very little blood in sight. But fortunately, it was a great choice since one of the main themes of the film is family. Surprisingly, the bond between Torakage, Tsukikage and son is funny, warm and poignant at times. Even the poop jokes the family exchange are more amusing than annoying and the son’s reaction to the jokes is priceless. Nishimura ably compensates for the lack of gore with his unique brand of bizarre humour and boundless creativity and his storytelling has improved since the pacing is faster, the storytelling is amusingly told with an European narrator called Francisco, who provides backstory on ninja culture that tears and honours the ninja genre.

Speaking of creativity, the action scenes in Torakage at first, typical for ninja fare. Ninja stars, use of trampolines for high jumps and flips, fake deaths, blood spurts and so on. But when the main plot starts, the action scenes are massively insane in scope and hilarious (intentionally) in execution. There is a minor, yet understandable criticism in Nishimura films that shows that his action scenes mainly consist of back and forth hitting, with very little to no actual choreography. But in Torakage, Nishimura makes up for lack of choreography and imagination saves the day. There is an action scene involving Pachinko that must be seen to be believed and an action scene in reference to Iron Man that had me laughing my ass off. There’s also an action scene that involves surfing on a long village street, using coffins as surfboards and another scene that involves an unorthodox use of a ninja star. Yes, it’s as uproarious as it sounds. Sure, there is bad CGI to be seen but since the film is not to be taken seriously, the attempts of humour (implied sexuality included, courtesy of Yuria Haga) comes off as hilarious.

Speaking of the cast, some of the cast members surprised me while others played to their strengths. First is Takumi Saito. When I first saw him in movies like the teen vampire grindhouse romance Vampire Girl vs Frankenstein Girl, I thought he was just a pretty boy with no personality to draw me in. But then I saw the low-fi robot flick RoboGeisha, where he was more engaging and having fun as the villain. Then I saw the romantic comedy musical For Love’s Sake, and I thought he was hilarious in that film as the dopey third wheel and the same went for the video-game adaptation Ace Attorney. But in Torakage, he showed convincing courage in his action scenes and his fatherly love in the bonding scenes worked. Having a little bit of heart and emotion in a film like this is incredibly rare and this film achieves it. It may not be a lot, but it’s something that the audience can latch on to. Yuria Haga (last seen in my guilty pleasure of 2014, Girl’s Blood) is fine as Tsukikage and her action scenes are good, particularly when she’s game for the more risque humour. Eihi Shiina, like her villainous role in Helldriver, not only chews the screen, she devours it with one mouthful and it is again so spectacular to behold that not even Kanji Tsuda (from Vampire Girl vs Frankenstein Girl and other cult films) can keep up. Masanori Mimoto is great as the tough renegade and rival of Torakage and Nana Seino is hamming it up as Mimoto’s partner with her metal claw as her weapon. The two have a good fight scene together in the climax as they take down ninjas all in a single take. Nishimura’s cronies (Maki Mazui, Hiroko Tashiki and a cameo from director Takeshi Shimizu) are all amusing in their small roles.

The Ninja War of Torakage was a very enjoyable experience that made me think that Yoshihiro Nishimura is more than just a person who specializes in gore and the film ends with a great “To Be Continued” tag, which I will eagerly wait for a sequel.

The cast are good in their parts

The storytelling is much better than in usual Nishimura efforts, resulting in a shorter running time

The action scenes are insanely enjoyable to witness

Those expecting the film to be more straight and narrow according to the trailer, will be disappointed