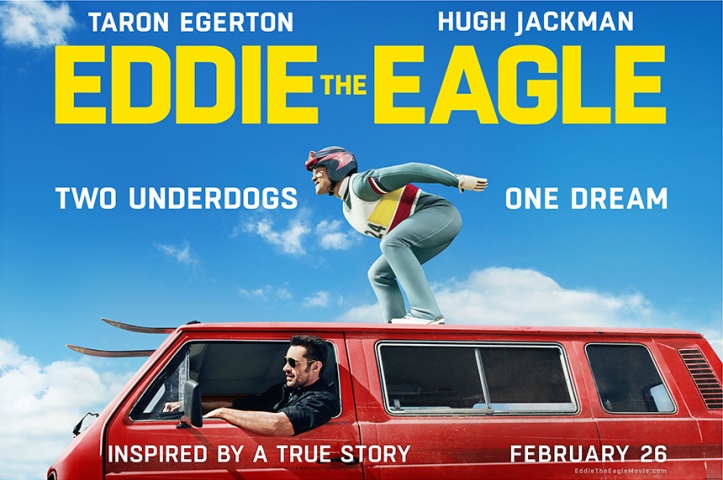 REVIEWER’S NOTE: Basically, the first paragraph of this review is a cut-and-paste of part of a review I wrote for the Japanese film, Flying Colors. I chose to do this because they are both similar in terms of genre and execution.

REVIEW: Biographical films, especially ones that revolve around triumphs of the human spirit, can range from the truly inspirational, i.e. The Pursuit of Happyness; to award-bait films like the dull and manipulative The Blind Side; to unmitigated disasters like the agonizing Patch Adams. But very few of those films show a comedic side i.e. in a very twisted way, The Wolf of Wall Street and this is where Eddie the Eagle comes in. Refusing to take the story in an overly serious way and dwelling on the absurd side of the true story of Michael “Eddie” Edwards, Eddie the Eagle is crowd-pleasing and fun entertainment for the masses with plenty of help from the likable leads and Dexter Fletcher’s sensitive direction that makes the story more than just afternoon TV fodder and turns it into something that is quite inspirational for an underdog film as well as an biographical film. 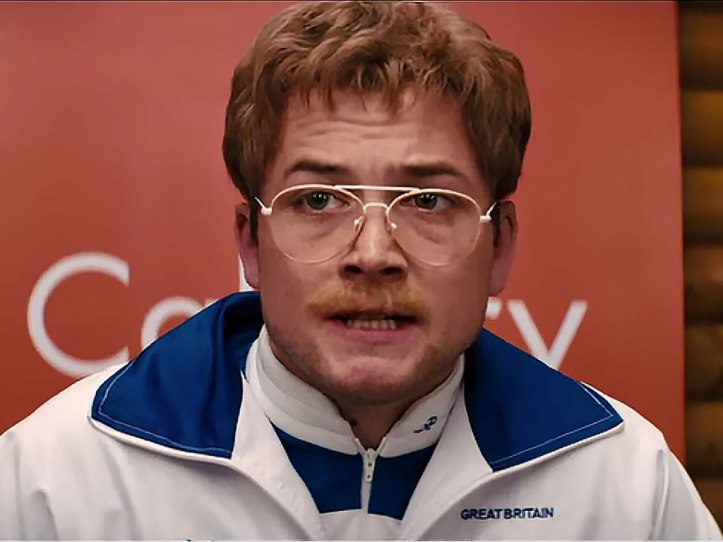 Rising star Taron Egerton stars as the titular character, an incredibly optimistic yet under-talented 22-year old who dreams of being an Olympian, to the annoyance of many, especially his stern father (Keith Allen). After many setbacks like peer pressure, lack of talent and criticism, he decides to become a ski jumper and sets off to Germany for training. Through his disastrous self-training, a drunken snow groomer Bronson Peary (Hugh Jackman) tells him to give up. Eventually, given their shared shunning from the other jumpers as well as Eddie’s insistence, they team up and try to get into the Winter Olympics in Calgary. Does he succeed? Of course! It wouldn’t be a famous story if he didn’t! And it has been well documented by Olympic broadcasts, interviews and even a book written by Eddie himself. But movies with predictable plots are still worthwhile viewing if the execution is above reproach and this is where Eddie the Eagle soars. Yes, the pun is definitely intended.

First off, the actors. Having exceeded my expectations in Kingsman: The Secret Service, Taron Egerton does it again in Eddie the Eagle. Egerton exudes a lovable, yet eccentric presence that could have ventured through cutesy and annoying territory, but he ends being identifiable and even relatable. It helps a lot to have Hugh Jackman as your coach. Basically reprising the scumbag-authority role like in Real Steel, he shares great chemistry with Egerton and the two have many funny moments like using actress/bombshell Bo Derek as a sexual reference of training motivation and they also have compellingly dramatic moments that can really stir the audience. The supporting cast all give fine performances but do not really stand out from their archetype roles, with notable exceptions of Christopher Walken as Peary’s mentor and Edvin Endre as Matti “The Flying Finn” Nykanen, who has a great scene with Egerton in an elevator. 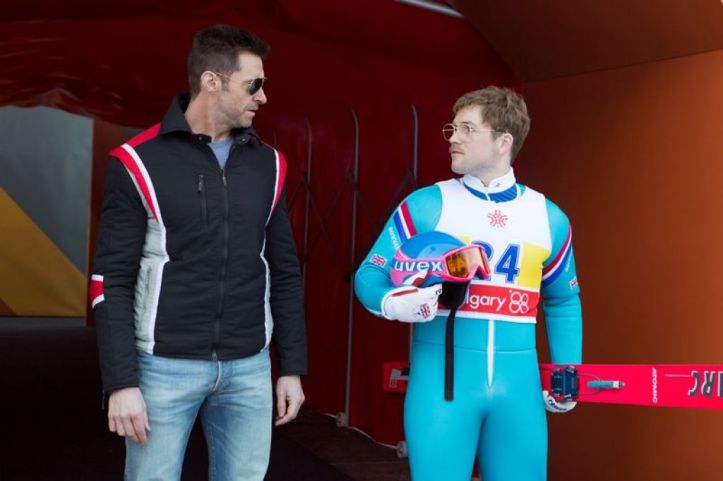 The director by Dexter Fletcher is unsurprisingly (or surprisingly, if you have seen his earlier films) light, considering the true story, and like Egerton’s performance, it rarely feels like it panders to the audience that it comes off more nostalgic and inspiring than overly obvious. I really loved the musical score by Matthew Margeson. It is so nostalgic and reminiscent of the 80’s (when the story is set) that I was in heaven whenever I heard it. The use of Van Halen’s Jump in the climax was just icing on the cake.

But in a biographical film such as this, there are plenty of flaws. The dramatized parts (and there are many) are just there to add drama, and they come off as embarrassingly clichéd i.e. the competitors/bullies, the authority figures etc. A LOT of people say that is very similar to the 1993 film, Cool Runnings. It is a very valid point but what is rather funny is that the two events happened concurrently and Eddie the Eagle even references it at one point. The predictability can be a turn-off to some and even the feel-good and wholesome tone can be a bit much, even for me.

But overall, Eddie the Eagle is a fun time at the movies and it might even inspire you to take up jumping. I jumped from the top of the cinema stairs to the floor so it obviously worked on me.

Predictable in every sense of the word

Too much drama for the sake of drama

The wholesome tone can be a bit much