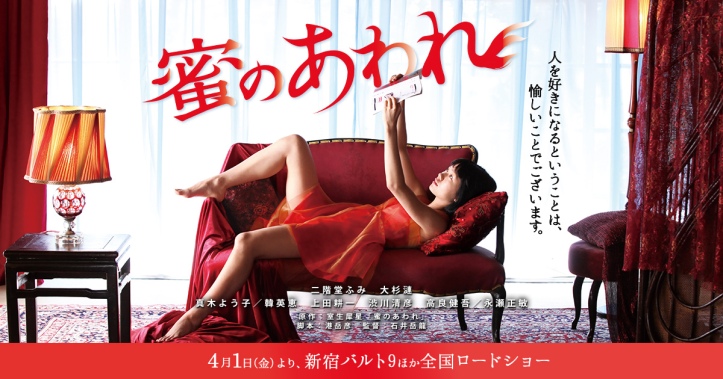 EXPECTATIONS: An enjoyable, whimsical and off-putting experience. With FUMI NIKAIDO!

REVIEW: Fumi Nikaido is an actress that I have, for a lack of a better word (or even an actual word), fan-boyed over since I saw her in Sion Sono’s unbearably nihilistic Himizu. Since then, she has gone on a huge variety of roles that border past the definition of “versatility”, with roles like an impulsive rising actress who is a daughter of a gangster to a woman who is in an incestuous relationship to a pop-idol singer to even a sadistic terrorist bomber! And we also have director Gakuryu Ishii (formerly known as Sogo Ishii) who was a rockstar of a director with such blisteringly frenetic classics like Burst City and Electric Dragon 80000v, but he also varies with another plane of style, aiming for more of an understated and even artful style of film-making with films like Isn’t Anyone Alive and August in the Water. After his return to his punk-rock roots with That’s It. he collaborates with Fumi Nikaido for Bitter Honey, a whimsically weird love story involving an old man and his pet goldfish. How could you not get excited over that? 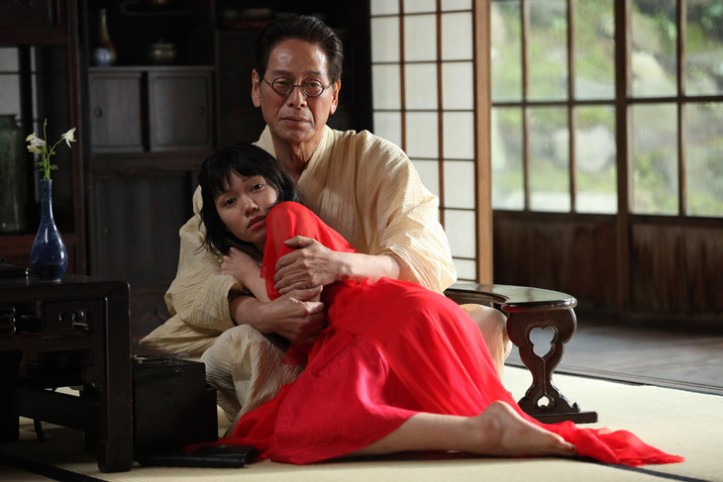 Fumi Nikaido stars as Akako, a shape-shifting goldfish in the form of a young girl fitted in red dresses, whom is a muse and adoring pet for an aging writer (who remains nameless) seeking much-delayed glory (Ren Osugi). Things quickly get complicated for the odd couple, however, when the writer’s deceased former student/lover, Yuriko Tamura (Yoko Maki) dollies into the plot, as ghosts usually do, and becomes the catalyst for Akako’s own needs and wants, while bringing about her independence and indirectly destroying the writer’s own fantasy of having Akako as his pet of desire. Figure in past lovers, musings about life and death, bouts of dancing, asteroids and even the famed Japanese writer Ryunosuke Akutagawa and you’ve got yourself a weird story. 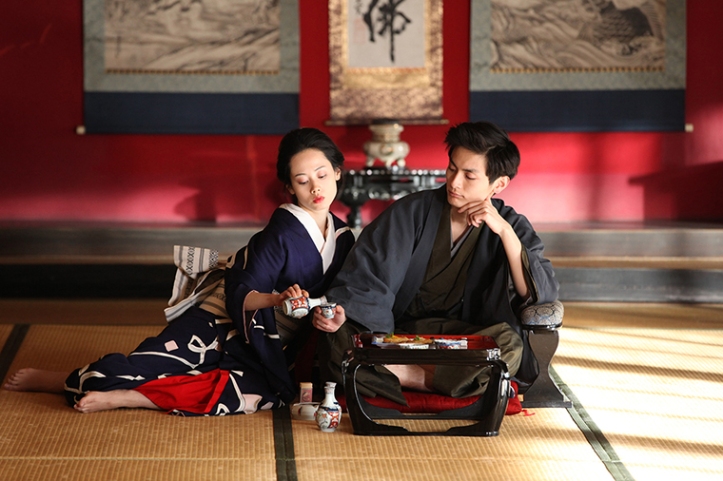 Veering very far away from his maverick style of film-making, Gakuryu Ishii employs beautifully understated touch to this fable that is also a cautionary tale about drowning in one’s past and its effect to the people around you. Themes of sex, life and death, desire and humanity are all dealt upon well without compromising the many tones of the film, instead adding a touch of beauty and wonder. Even a pivotal sex scene in the second act is executed with a sense of wonder as well as eeriness. The production values certainly reflect that in spades; with Kazuhiro Sawataishi’s fantastic costume design (absolutely loved the outfit of Akako), art director Hisashi Sasaki’s period look that feels accurate yet distinct and cinematographer Norimichi Kasamatsu’s marvelous compositions, mixed with smooth long takes, like a scene where Akako jokingly confronts Yuriko that involves a revolving dolly shot that would not be out of place in a Michael Bay film. The music compliments the many tone shifts of the film, shifting from amusingly whimsical to dramatically sound to even eerily haunting.

And going along for the weird and bizarre ride, the actors employed here give their all, to even the smallest parts. Fumi Nikaido is an absolute wonder as Akako, who achieves the perfect pitch of being cute without actually becoming annoying or grating. And throughout the film, she conveys the character’s growth and wonder like a pro; particularly in scenes where she experiences a kindling of a friendship between herself and Yuriko and experiencing jealousy for the first time after discovering something about the aging writer. It certainly helps that her dancing is great (which pays off with the ending) and her impression of a goldfish brought a huge smile on my face. Ren Osugi embodies his problematic character really well and comes off more sympathetic than his character has any right to be. The peak of his performance is in the climax, when his character bares his heart and soul about his insecurities and combine that with Nikaido’s completion of her character arc, it is compelling to witness. 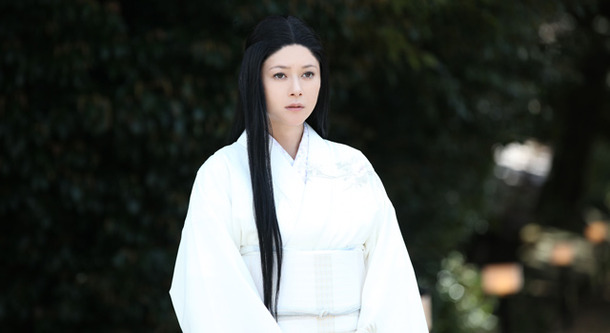 The supporting actors are all great and do more than they should than the script allows them to. Yoko Maki, whom I have bragged about being incredibly underrated, adds depth and nuance to her tragic character, without being morose and even coming off as amusing at times. She shares good chemistry with Nikaido and they bring out the funniest scenes together, like their first meeting. But the biggest surprise is Kengo Kora as the real-life famed writer, Ryonosuke Akutagawa. He makes the biggest impression with his limited screen-time and alongside Ren Osugi, brings one of the most compelling scenes that finally bring about the aged writer’s arc into fruition. Aside from Kanae Han, who is surprisingly understated in her small role as a tragically burdened student of Osugi’s, the rest of the cast leave an amusing impression, especially Kiyohiko Shibukawa as a bartender who is sloppy with his care of his many goldfish. 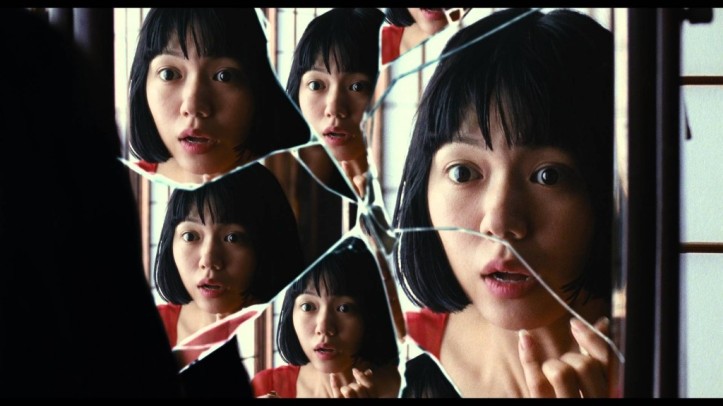 As much as I rave about the oceanic film of its acting and production values, the water gets a little bit murky about its storytelling. The film does take quite a bit with its first act to really get anywhere so when the characters are getting into conflicts that we barely know about, it is hard to get into their plights at first. Even for Western viewers, the relationships in the film can be seen as a little creepy and off-putting. Also, some of the whimsical touches tend to grate after a while, like the sound design reflecting actions in the water that appear throughout the film. But when it reaches the third act, the arcs suddenly become clear and the gradual growth of the characters suddenly make sense, making the emotional journey a worthwhile trek. And the film ends on a subtle, yet emotional crescendo of an ending that truly embodies the meaning of the English title.

Bitter Honey is theoretically an encapsulation of Nikaido’s performance. Cutesy, alive, maturing, a little bit off-putting, yet thoroughly irresistible. If you are unsure about the off-kilter story, Nikaido’s impression of a goldfish is surely worth the price of admission. 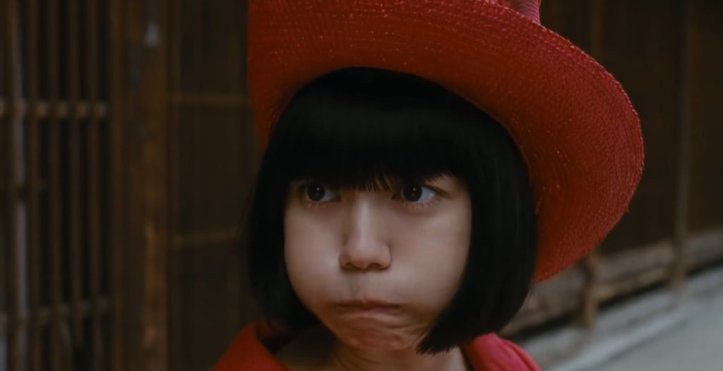 Production values all add to the feel of the film beautifully

Sound design may grate at times

Weirdness of the story will put people off