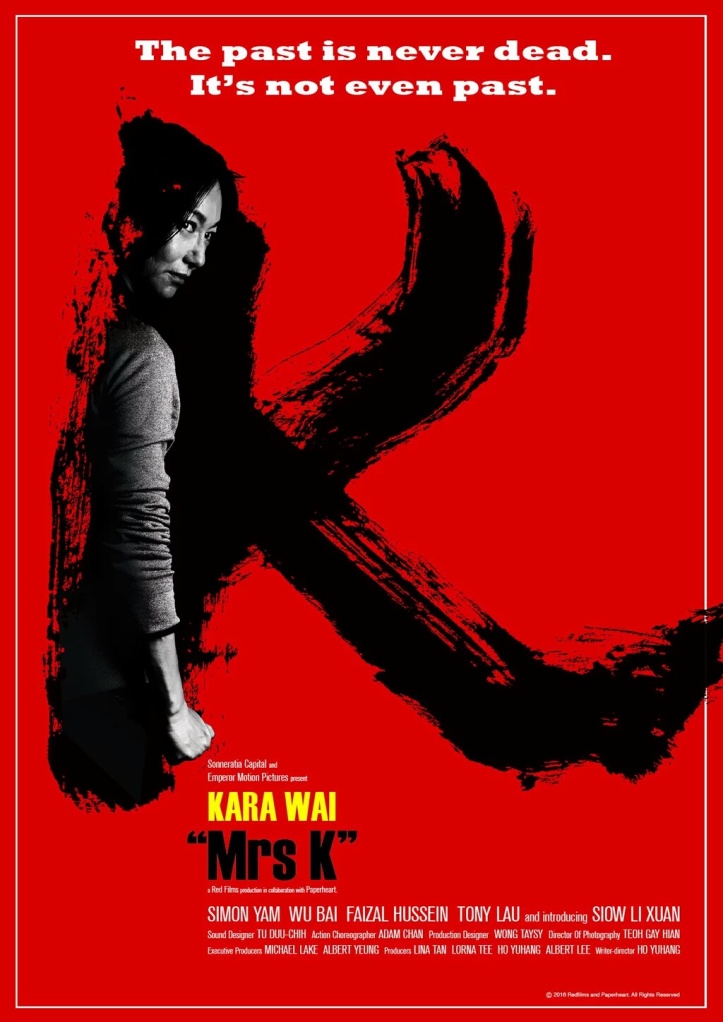 EXPECTATIONS: An action-packed end to an illustrious action career of Kara Wai.

REVIEW: Kara Wai has had a very long and illustrious career. Ever since she was discovered by acclaimed director Lau Kar-leung, she has been in countless martial arts films, building up her reputation as a martial arts queen. Hitting her peak with the Shaw Brothers martial arts comedy, My Young Auntie, winning many actress awards, she has gone through a variety of genres via supporting roles, from comedies to crime thrillers and romances.

But in 2009, she had a career resurgence and that is thanks to her collaboration with Malaysian director Ho Yuhang. The result is At the End of Daybreak, which was a nihilistic, downbeat drama that won Wai many actress awards and brought her back to the spotlight.

Now, we have their second collaboration with Mrs K, which is being marketed as a swan song to the action career of Kara Wai. Will the final product live up to the marketing as well as in comparison to the accolades of At the End of Daybreak? 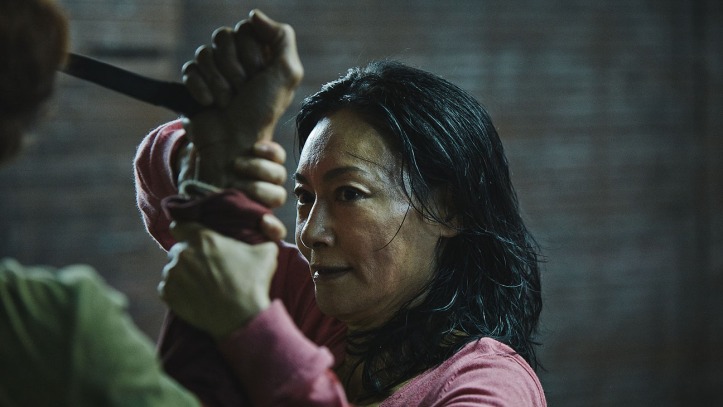 The film starts off with the grisly deaths of three men: a loan shark (Dain Iskandar Said) who is sliced to death in his office; a priest (Kirk Wong) who is hacked to death in the confessional booth and a retiree (Fruit Chan) who dies in his own swimming pool.

We then go ahead to an unnamed rich housewife (Kara Wai), who is married to a gynecologist (Wu Bai) and is the mother of a lively young girl (Siow Li Xuan). The housewife is then tracked by a sleazy private eye (Tony Lau), who is convinced that the housewife (along with other associates) is responsible for a past crime in Macau.

Also on her trail is a psychotic man (Simon Yam) looking for revenge on the housewife, alongside his henchman (Faisal Hussein). The two kidnap the housewife’s daughter, which forces her hand to confront her violent past whilst trying to save and protect her family in the process.

For those who have seen the trailer for this film, thinking that you’re going to get an action-packed thrill ride will probably come out of this film a bit disappointed. But the final result is more of a crime drama that has several effective action scenes, a very odd sense of humour and a definite Tarantino influence that surprisingly works more than it annoys, as it makes the film a fun, stylish experience that packs more of an emotional punch than necessary..

The musical score adds to the fun as it is quite reminiscent of Spaghetti westerns as well as the scores of John Carpenter films. The cinematography is smooth and fluid, yet it can get appropriately gritty and dirty when the action starts, which adds a sense of menace to the film.

It is also clear that director Ho Yuhang is a fan of genre cinema, but in particular, Hong Kong cinema, very similar in feel to Teddy Chan’s kung fu/crime flick Kung Fu Jungle. Casting many Hong Kong veterans in fun roles, employing a retro feel in terms of the action as well as showing the many facades of Kara Wai’s filmography in her starring role.

In the scene where you see Kara Wai for the first time, she already shows a paternal side, a funny side and a tough, commanding side, all in the same shot. That alone shows that Wai is given a role that can be fitfully described as a satisfying role that encapsulates her career perfectly. And funnily enough, that basically is Mrs K in a nutshell.

As for the other actors, they are all good in their roles and it certainly helps that most of the actors are cast amusingly against type and/or convention. Besides Simon Yam (who does psychotic like only Simon Yam can), Siow Li Xuan makes a good impression as the surprisingly resourceful daughter (who’s a training martial artist!) who won’t take being a damsel as an option, while Tony Lau plays an amusing version of the sleazy, vile characters he has played of late i.e. in Revenge: A Love Story. And oddly enough, Wu Bai is surprisingly convincing (as a gynaecologist of all things!) and he has one of the best moments in the climax that addresses the meta casting of the film. But the biggest impressions goes to the cameos from the three directors (Chan, Wong and Said) in a scene in the final act that can only be described as something out of a fever dream.

But for those wondering about the action scenes in the film, there are less than people might think, but they are convincing in some surprising ways. First of all, the fight scenes are more brutal than balletic and the editing and camerawork certainly reflects that. Kara Wai puts herself through the wringer with her scenes, as she fights people half her age and twice her size to great effect.

Second of all, the film addresses the age of Wai and it does so in a refreshingly subtle fashion. None of it is said or addressed out loud, but is seen through the actions of the character. Whenever she jumps and lands from a tall height or blocks an attack, she winces in pain and we feel for her every single time, which adds much needed tension and suspense.

As much as I enjoyed the film, I did expect it to have a little bit more action and a little less reliance on plot and pathos. In the 90 minute run-time, the focus towards plot and its machinations are little more than mere digressions and it drags the pacing down quite a bit and the ending of the film is more of a emotional crescendo rather than a physical one, which can be a bit ill-fitting. But really, that all comes down to expectations.

Overall, Mrs K is a fitting end to the action career of Kara Wai, a fun crime drama in its own right, with good action scenes, some very amusing moments of odd humour and a sheer love of genre film that director Ho Yuhang conveys throughout, particularly during the end credits. Just temper your expectations a bit.

Odd, yet fitting sense of humour

Those expecting a pure action film will be a bit disappointed

Too much focus on plot and character than necessary