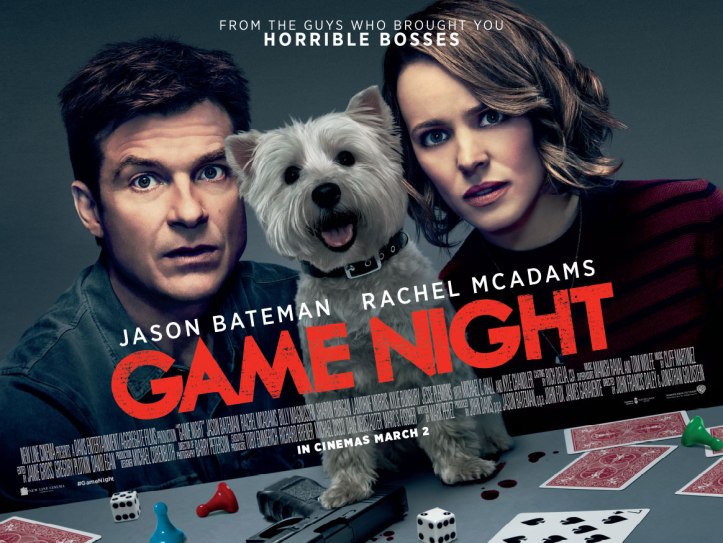 EXPECTATIONS: An unfunny comedy along the lines of the disastrous film, Vacation (2015).

REVIEW: Murder mysteries have been a long-time staple for many people in the world in terms of literature as well as films and it is a well-deserved staple. Whether it’s an old-fashioned detective story (Murder on the Orient Express), a children’s adventure (Young Sherlock Holmes), a romantic farce (Blind Detective) or a flat-out comedy (Clue), it’s the type of genre staple that can result in lots of fun, particularly if it involves audience participation. If 2018’s comedy, Game Night could live up to those examples, that would be great.

But the directors of Game Night are John Francis Daley & Jonathan Goldstein and as the Bard would say, “therein lies the rub”. Some of their contributions to film haven’t been well-regarded. In the case of their screenwriting efforts, Horrible Bosses was okay, if quite overrated, but the sequel was horrible; The Incredible Burt Wonderstone was an unfunny mess and Cloudy with a Chance of Meatballs 2 was a disappointment, particularly in comparison to the first film.

But they did contribute to last year’s enjoyably frothy comic-book effort, Spider-Man Homecoming, which does give signs of hope. And yet we have their feature film directorial debut of theirs, which is Vacation, a reboot of John Hughes’ original comedy, which was horrid. With a mixed bag of a filmography, it is understandable that one would hesitate to watch Game Night, even with the talented cast assembled. Does the film exceed expectations and provide tons of fun or will it topple over like a Jenga tower?

Jason Bateman and Rachel McAdams star as Max and Annie, a happily married couple whose modus operandi is to plan weekly couples game nights, where they get their much-needed thrills in their lives.

It is only until one night when it gets kicked up a notch when Max’s charismatic wealthy-as brother, Brooks (Kyle Chandler), arranges a murder mystery party, complete with fake scenarios, props actors. But when Brooks gets beaten up and kidnapped (in front of the guests), it’s all part of the game. Is it?

So does the film exceed expectations? Thankfully, it does and it is massive props to the cast, the fun premise and the improved direction from Daley and Goldstein. Although it helps that the filmmakers know their mysteries (references of David Fincher’s The Game and the TV series Murder, She Wrote are everywhere), it’s quite clear on the screen that Daley and Goldstein has upped their directing game between 2015’s Vacation to Game Night, as they adopt filmmaking techniques (especially the visual comedy of filmmaker Edgar Wright) to amp up the comedy and it works for the most part.

Fast editing, a propulsive score (from Cliff Martinez, of course) creative cinematography (used to visually convey the look of a miniature board game convincingly), long takes (involving a game of hot potato that’s quite funny) and funny visual cues like subjects appearing into frame or out of frame; all of these techniques add to the film.

They even apply some subtlety to the jokes (like not showing the bodily fluids) and that pays off beautifully in a scene that involves a bullet extraction that is reminiscent of Hong Kong director Stephen Chow‘s spy comedy, From Beijing With Love. Speaking of Chinese subjects, there’s a dialogue exchange in the climax that had me laughing so hard, that I literally had to look up IMDB to see if the film was a Chinese co-production.

Back on topic, unlike Edgar Wright, Daley and Goldstein don’t have the skills to foreshadow small moments to big payoffs. Pop culture jokes are repeatedly told almost to the point of ad nauseum that it becomes quite predictable that it will pay off the way it does later in the film. But overall, it is an improvement over their last film, and that deserves positive recognition. 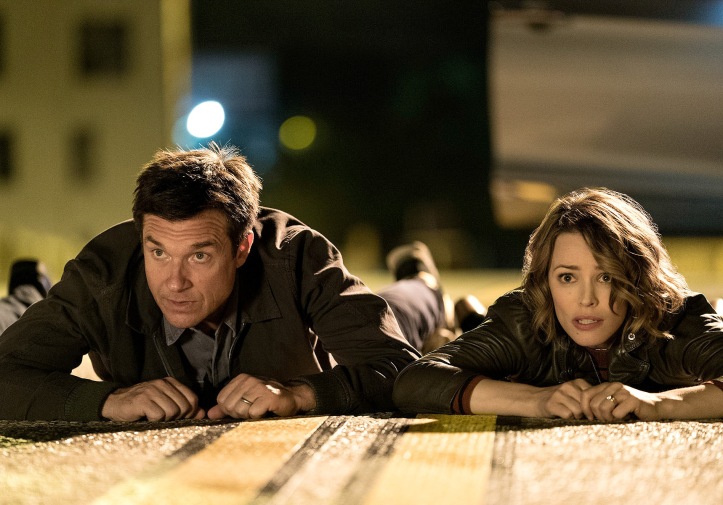 What also deserves positive recognition is the cast, and they are all on point, even if some are playing the same character types they did in prior projects. Jason Bateman does the straight-man performance that he does ever since he started the TV series, Arrested Development, and it still works well. And he’s paired well with Rachel McAdams, who looks like she’s having the time of her life, being animated and spirited with all the hijinks, and enjoyably so.

With a game supporting cast consisting of Kyle Chandler (making fun of his salt-of-the-earth image), Billy Magnussen (capably dorky and oblivious, as opposed to his scumbag-type role in Ingrid Goes West), Lamorne Morris and Kylie Bunbury (a likable double act, with the former doing a killer Denzel Washington impression) and Sharon Horgan (capably satirizing the token character), the best person in the film is Jesse Plemons.

Clearly making fun of his psychotic persona from the TV series, Breaking Bad, his creepy presence (including a scene where he slowly saunters off-screen) and deadpan delivery guarantee many laughs. He truly looks like a character that just wandered into the set of this film, but I mean that as a compliment. But what makes him a great character is that Plemons always retains a sense of humanity, making him believable as well as approachable. Kind of.

As for the flaws, aside from the direction, the third act does drag quite a bit due to the excessive amount of twists (despite the 100 minute runtime), some of the pop culture references are quite dated (Fight Club? The Green Mile?), some running jokes don’t really land (including a guess-the-celeb) and lastly, the cameos (which I won’t spoil) don’t really amount to much.

Overall, Game Night is nice surprise from the directors of Vacation, with a fun premise, a capably comedic cast and the improved direction of Daley and Goldstein. Their next project is the superhero film, Flashpoint and if Game Night is any indication, there is a chance that they might pull it off.

A clever premise and sharp script