EXPECTATIONS: A goofy, campy thriller with a cast and crew that know what film they are in and giving it their all.

REVIEW: If there’s a bias I have as a film critic, it is that I have an affinity for seeing established actors give unhinged performances in film that accommodate said performance. Most of these performances are usually in thriller genres, like the psycho-logical subgenre.

Yes, the use of the hyphen is intentional, as those films delve more into the psycho, rather than the logical. With enjoyable examples like Basic Instinct, Single White Female, Fatal Attraction; films that were prevalent in the 80’s and 90’s, these types of films are getting more and more uncommon. What these films lack in substance, the cast and crew make up in sheer commitment.

Enter Irish filmmaker Neil Jordan, an underappreciated director who has made many above-average films like Michael Collins, Byzantium, The Crying Game, The Butcher Boy, The Good Thief, The End of the Affair and so on. His latest project is the appropriately titled psycho-logical thriller Greta. With an established actress virtuoso Isabelle Huppert, two young talents Chloe Moretz and Maika Monroe and Jordan’s lucky charm, Stephen Rea; will Greta deliver a wickedly fun time, similar to the pulpy 90’s psycho-logical thrillers of yore?

Set in present New York City, we follow the story of Frances “Frankie” McCullen (Chloe Moretz), an introverted and naive young woman who is still settling in the hustle and bustle of the city, due to the recent passing of her mother. She lives with her outgoing and spirited roommate, Erica Penn (Maika Monroe) and works at a swanky restaurant as a waitress.

On the commute home, Frances discovers a lost handbag and and promptly returns it to Greta (Isabelle Huppert), an eccentric and lonely French piano teacher who loves tea and classical music, consisting of Chopin, Franz Liszt and others. As a way to fill each others’ voids, the two bond, striking up a seemingly harmless relationship. But when Greta’s behavior becomes increasingly erratic and obsessive, Frances does whatever it takes to end the toxic relationship before things spirals out of control.

The cookie-cutter plot itself (written by co-writer Ray Wright, known for writing horror films like Case 39, Pulse and The Crazies) is no great shakes, as it is like a functional piece of furniture. It’s well-made, stands up correctly and achieves its true purpose, yet there’s nothing special about it. But in the hands of the cast/crew and director Neil Jordan (who also rewrote the script), Greta manages to weaponize its resources in its genre trappings and provide a sinfully entertaining and amusingly acidic time at the movies. Cookie-cutter included.

Let’s start off with negatives. Apart from the cookie-cutter plot, some of the tropes of these films like the “supernatural script powers” and the ineffective police and male authority figures (including Colm Feore as Francis’ father) still exist in this film (the latter trope, being amusingly familiar to Jordan’s earlier film, The Brave One); powers such as characters moving with super-speed from one location to another or how characters can recover so swiftly after being blatantly incapacitated; police who prop up and do very little (apart from having Stephen Rea appear, doing his trademark hangdog performance he does so well). But those moments are executed to a cartoonishly funny degree (involving jump scare noises), that it lends them a hint of self-awareness and a humourous edge.

Working up to the positives, the script does subvert audience expectations as to how certain story elements and characters play out. For instance, Monroe’s character of Erin. At first, her character comes off as the stereotype of being a ditzy blonde, but thanks to her character’s burgeoning resourcefulness and Monroe’s entertaining performance, it becomes an enjoyable change of pace from the genre norm. 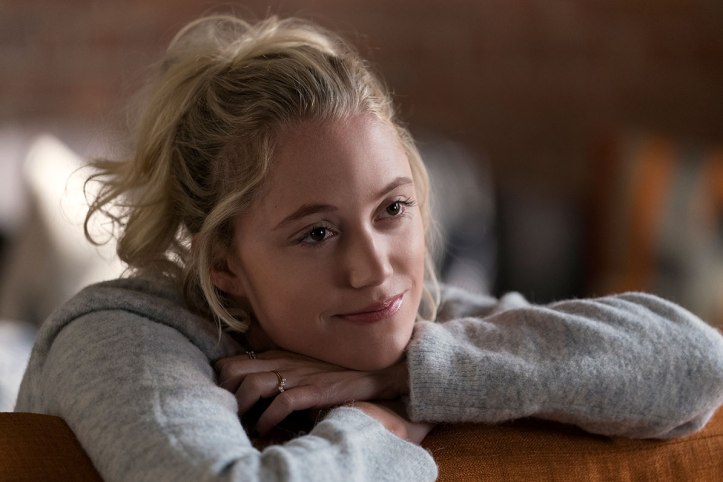 Cinematographer Seamus McGarvey, production designer Anna Rackard (both whom have worked with Jordan) and especially costume designer Joan Bergin do wonders with the material by lending the film a creepy, surreal Grimm fairy tale vibe that accentuates the presence of the character of Greta, even when Huppert is not on-screen. The location of Greta’s home stands out from the metropolitan setting by being deep in an alley, lending it a cottage feel.

The costumes and sets are all influenced by floral images, lending it a nature vs nurture feel that compliments the mystique of the Greta character and the one particular room in Greta’s home is shot and designed in such a gritty, earthy way that it is evocative of Daniel Pearl‘s cinematography in The Texas Chain Saw Massacre. Even a particular prop of a toy chest is used not only as an effective instrument of torture, but also sells the portrayal of Greta with a memorable image so succinctly and perfectly.

The backstory of Greta is rarely dealt with and rightfully so, as it lends an air of mystique and unease as to why she is who she is. But the logic of her actions makes thematic sense as to why she does what she does, but there is no true certainty, and that gives the titular character its thematic power. There are no flashbacks nor many scenes of true exposition, only doubts (delivered in a scene by Zawe Ashton, in a small role).

The cat-and-mouse scenes between Moretz (and Monroe) and Huppert (especially those involving mirrors and elevators) are executed with intensity and surrealism that brings to mind the unreal moments of Takashi Miike‘s Audition, which are complimented by the great musical choices, Javier Navarette‘s playfully blatant score and entertainingly grisly moments. A scene in the third act, which will provoke gasps, earns its MA15+ rating alone, and rightfully so.

But what really sells the material is the cast. Or more specifically, the three main actresses. Chloe Moretz brings credibility and nuance to her character, making Francis a believable, if slightly and understandably dim-witted heroine (as expected in a film such as this), who is inwardly desperate in filling the void left in her heart due to her mother’s passing.

Maika Monroe is a lot of fun as the skeptical, impulsive yet supportive friend; lending an giddy, yet brash demeanour that is surprisingly funny. For those who are familiar with Monroe’s status as a scream-queen due to her roles in It Follows and The Guest, she does have a few moments, where she exercises those acting muscles with aplomb. The two have worked together before in the sci-fi flick The 5th Wave, and the two bring their practiced chemistry, making their friendship easy to believe and care about.

And of course, there’s the French queen herself, Isabelle Huppert. In a Q&A session, the reason why Huppert chose to do this film was because she found it appealing to play a monster. Seeing the final result of her performance, she looks like she is having the time of her life in the part. Huppert is spectacularly entertaining, as she exudes the perfect balance of maternal love, childlike naivety and monstrous rage.

Yet, she never lets takes her performance too seriously or acts over the material, leading to many seemingly spontaneous and inspired moments. One moment involves an impromptu dance that is gleefully executed and incredibly well-timed and another involves her reaction to a syringe, that is both gory and amusingly macabre. Huppert even gets in on gleefully making fun of her French nationality!

Overall, Greta is B-grade schlock made with A-level credentials and the latter makes all the difference, with the cast and crew knowing exactly what they are doing and what film they are working in. It is deliciously depraved in all the right ways.