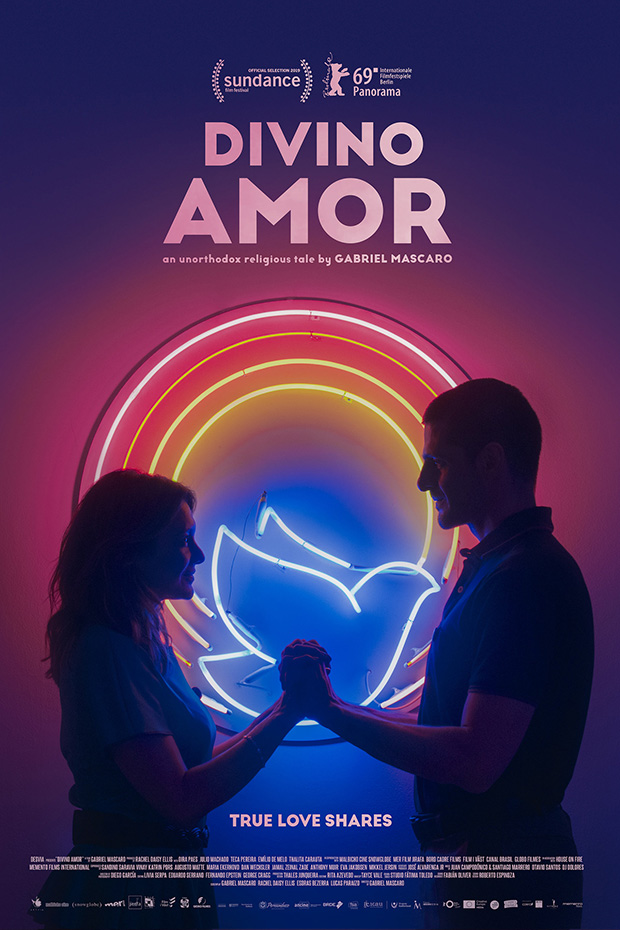 From the look of the poster, it would be safe to assume that the film would be a romantic drama that is possibly set in the 1980’s. But the film Divine Love, by director Gabriel Mascaro, is not like that all.

What the film equates to is a sci-fi dystopian film; a character study about a woman who struggles to hold on to her beliefs when her life gradually falls apart; a parable about society’s view of religion/love as well as a commentary about contemporary Brazil and its gradual progression into more conservative attitudes.

It may sound like an overly ambitious piece of work, when you find out the film is close to 100 minutes. But director Mascaro and his three other co-writers manage to keep all the plates spinning in an entertaining and compelling fashion.

The cinematography (by Diego Garcia, who has worked on Cemetery of Splendour and the mini-series Too Old to Die Young) is beautifully drenched in neon lights, which conveys an enjoyably retro feel as well as adding credence to the conservative ways Brazil as portrayed being behind the times.

Leading actress Dira Paes (whom I’ve last seen in The Emerald Forest by John Boorman) is fantastic as Joana; succeeding in the dramatic and the sensual moments with ease and conveying her character as a passionate and committed woman who is stuck contemplating between her faith and her future.

While the film may quite blatant in its use of metaphors (e.g. a dog in heat) and some of its story threads are not resolved by the film’s conclusion, Divine Love is one unique experience that is sure to illuminate, titillate and satisfy.